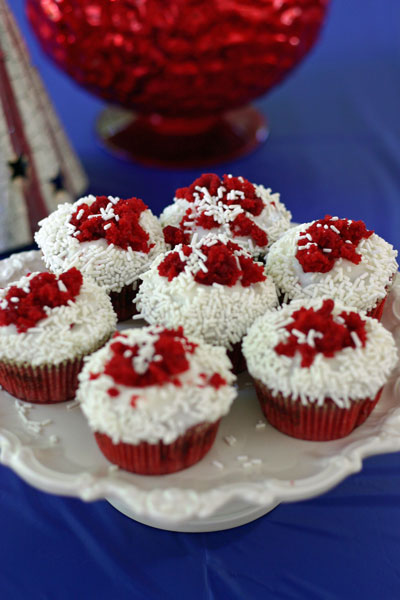 I love good old fashioned 4th of July fun.  Family, grilled food, fireworks and a red, white and blue color scheme make this one of my favorite holidays.  I know, I say that all the time.  I think I am in love with whatever holiday is next.  Celebrating pretty much anything is what I really love and yesterday that was the 4th of July! 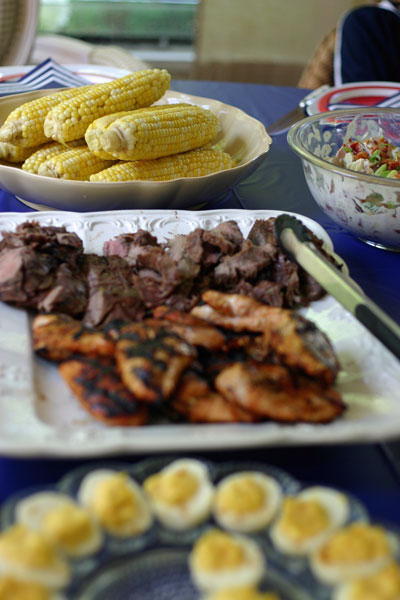 The menu was full on traditional, grilled flank steak, BBQ chicken, corn on the bob, warm  potato salad with bacon and deviled eggs.  For dessert we had double dipped strawberries and red velvet cupcakes filled with cream cheese frosting. 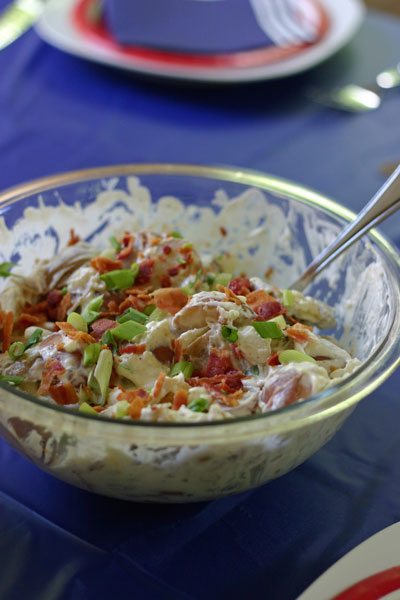 The warm potato salad is a favorite side dish around here especially with anything grilled.  It can certainly be chilled as other traditional potato salads but serving it warm is the way we like it the best.  Creamy with the crunch of bacon and a fresh burst of green onion.  Delish!

Print
This can be served warm or cold. Served warm it makes a fantastic side with anything grilled!
Author: Nesting With Style
Recipe type: Salad
Ingredients
Instructions
3.2.2708 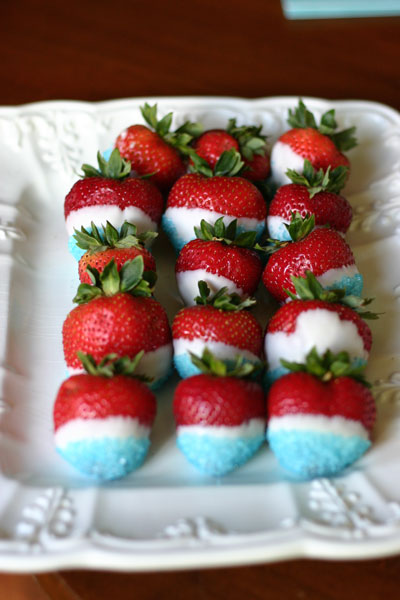 I thought I would whip up a batch of the Pinterest favorite double dipped strawberries.  Fast, easy and quite tasty these little goodies are the newest addition to holiday menus around here.  I barely had a chance to even take a photo of them before they were gobbled up! 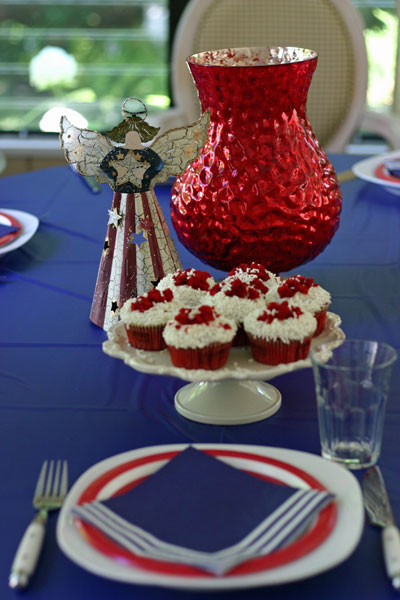 I hope your 4th of July was filled with family, food and fun! 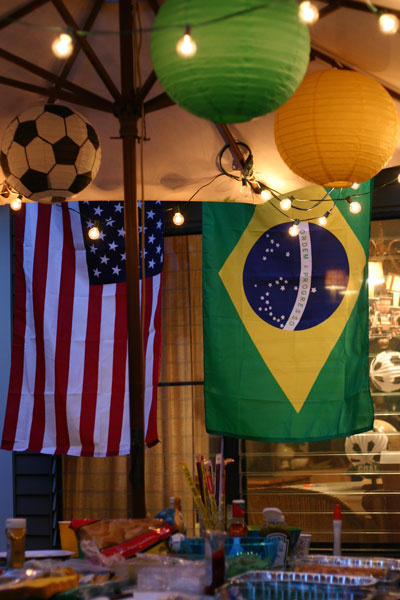 It was time for the end of year party for my son’s soccer team and luckily for us it coincided with the World Cup.  Of course we decided to throw a Brazil 2014 World Cup Party!

There were three party zones for the party.  One for food and beverage service, one for eating & mingling and the last (and most important to the boys) was the soccer zone. 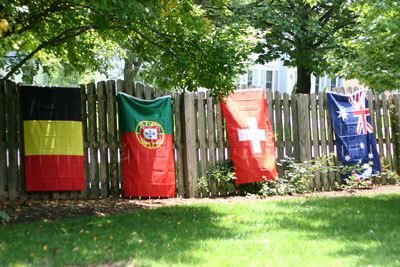 I knew that the rectangular area on one side of the house was the perfect soccer area.  After all it had long ago been designated as such (with the missing grass in front of the goals to prove it).  In the International spirit of the World Cup I decided that it would be fun to line the house (on one side) and the fence (on the other) with the flags from the World Cup teams.  Luckily I found an assortment of 3 x 5 flags on soccer.com for $4-9 each.  We even put up lights on the house and so the soccer didn’t have to stop when the sun went down! 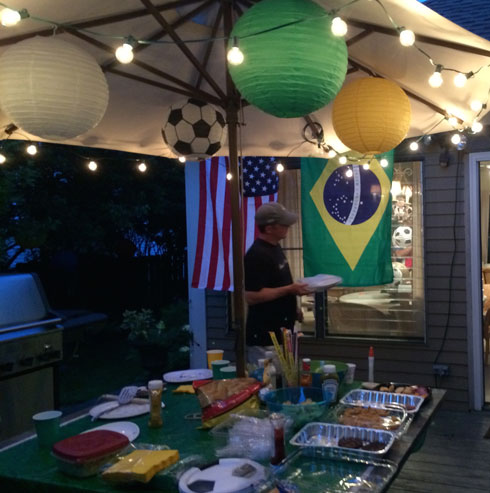 The next zone was the food and beverage area.  Our deck was the perfect location for that.  A large square table in the middle decked out in a green tablecloth for the buffet with twinkling lights strung through the umbrella with a few paper lanterns.  It is amazing how little lights can cast such a magical glow.  Hung together were the Brazilian and US flags. 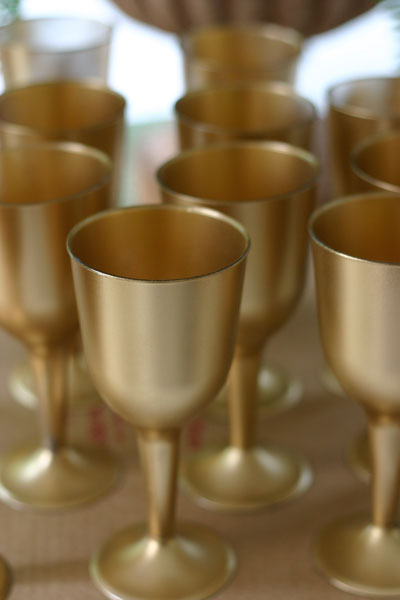 For the party favors I decided that little “World Cups” for each boy were in order.  I had some leftover spray paint from my Olympic Rings which worked perfectly when sprayed on plastic beverage glasses.  Of course they kids couldn’t drink out of them but they were the perfect container for lots of World Cup type treats…chocolates, a medal, World Cup trading cards and stickers and other little goodies. 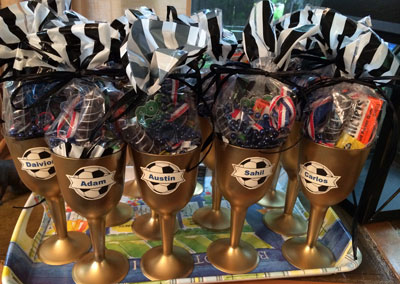 The thing that helped add a large dose of festive fun was the addition of lots of different paper lanterns.  I love that they are inexpensive, come in a multitude of colors, are easy to use and have a huge impact.  I found great soccer ball lanterns at paperlanternstore.com and filled in with larger colored lanterns. 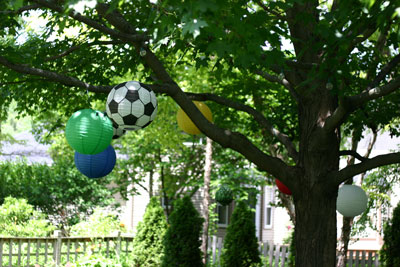 I used 5 of the 14″ soccer lanterns and then filled in with the much less expensive 16″ colored versions to fill out the tree.  The colors were so bright and beautiful by day and with the small cafe lights were magical at night. 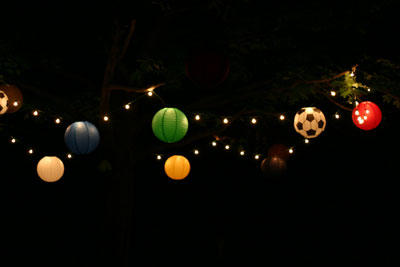 I enjoyed putting this together and look forward to hosting at least one more Brazil 2014 World Cup party before the fun ends in a couple of weeks!