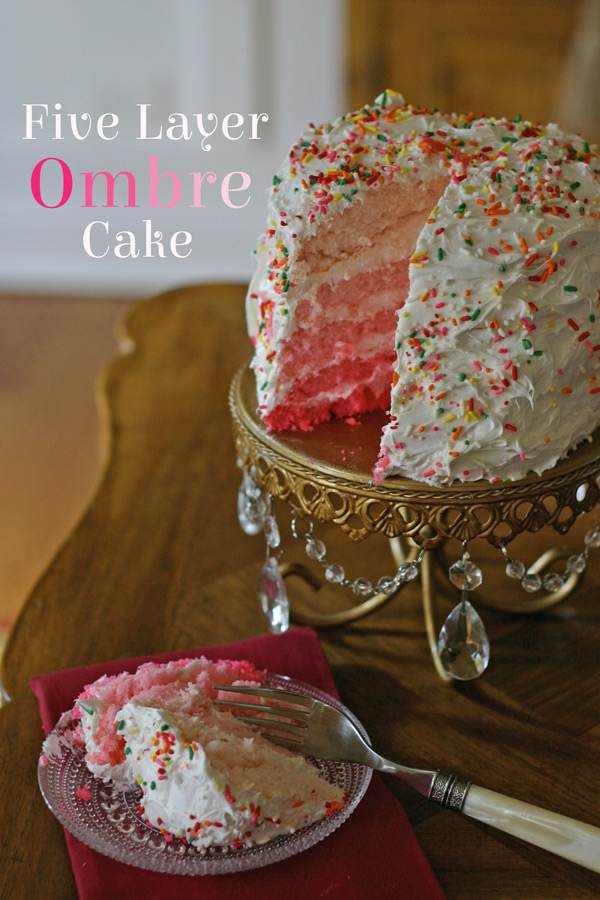 I found these fantastic Wilton cake pans  while taking a peek at the Sur La Table website for Macaron supplies.  I adore those fantastic rainbow and ombre cakes which are all over Pinterest right now but had some reservations about tackling one myself.  First of all the thought of a huge multi layer cake, usually made with at least two recipes of batter, was not an attractive thought.  Don’t get me wrong…the family loves cake.  But not two cakes in one.  I was sure that at least half would end up in the trash.  Such a waste.  My second reservation was that it is a busy time of year and I didn’t really want to spend all day wrestling with the thing. I wanted my ombre cake but I wanted it to be easy too. Did I just type that? Oh yes I did.  I wanted my cake and to eat it too. (Sometimes you just have to go there).  Seeing these pans inspired me.  I would have my five layer ombre cake. 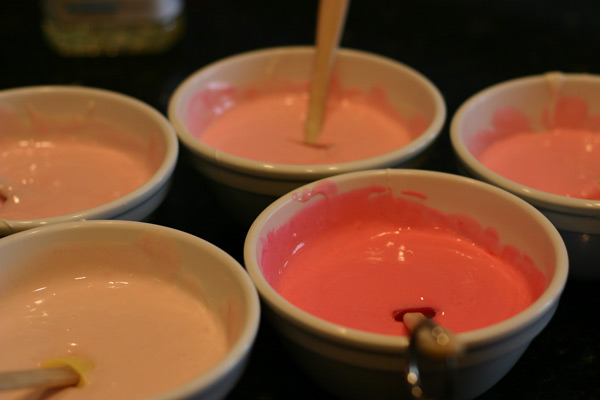 One of the neatest things about this cake is that it can be made with ONE recipe of cake batter…or if you are in a hurry, one cake mix.  Yep.  Just one.  I mixed up the white cake batter and divided it into 5 cereal bowls.  I used a pink gel food coloring and started coloring the batter.  No food coloring in the first bowl.  A couple of drops in the second.  A few more in the third and so on.  Soon I had five different colors of batter waiting to be baked into my five layer ombre celebration cake…dreams are made of this! 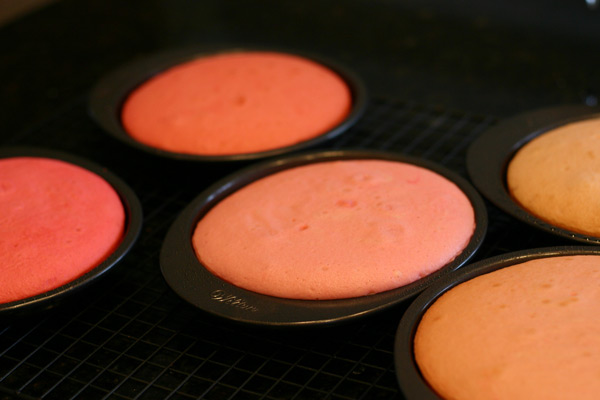 18 minutes later I was looking at five layers of baked pink goodness.  Yum!  Being smaller (about 6″ around) they cooled rather quickly and were easy to handle.  I broke out one of my favorite and festive little cake stands and got to work.  As I was on a tight timeline I used pre-made frosting (and ended up using about 1 1/2 cans).  I used Duncan Hines white whipped frosting which ended up being the perfect choice.  Very, very fluffy and light.  I think a traditional buttercream would have weighed the cake down too much.  I finished with a handful of rainbow sprinkles and it was time to eat. 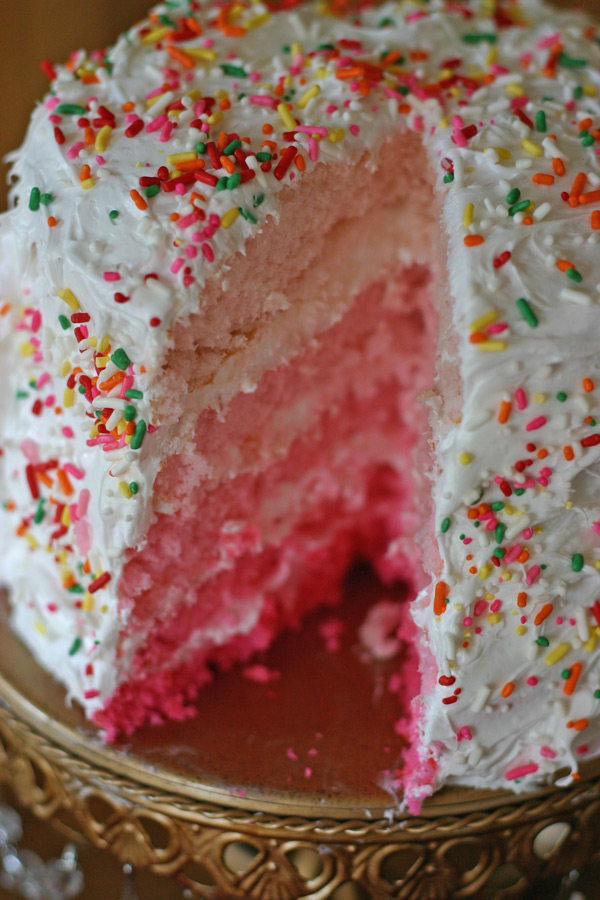 Things I am going to do differently next time around…I will not only grease but also flour the pans.  I had some sticking issues and I want the cake to come out cleanly next time.  Also, I will make sure the two darkest layers are a bit different in color I think more contrast would be good. And finally, a new color scheme…perhaps…a rainbow cake.  Too bad I didn’t find these pans until after St. Patrick’s Day that would have been adorable.  Oh well, there is always next year. 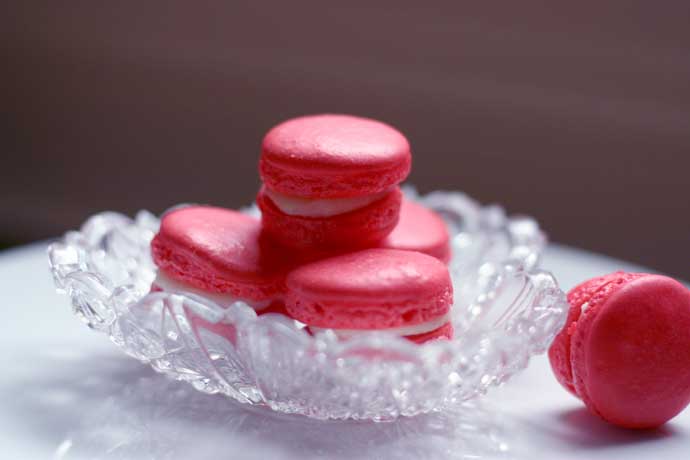 The Basic Recipe: Can be found here.

I’ve taken some photos of making the red velvet macaron below.  It is amazing how a few drops of food coloring can really change a plain macaron into something festive! 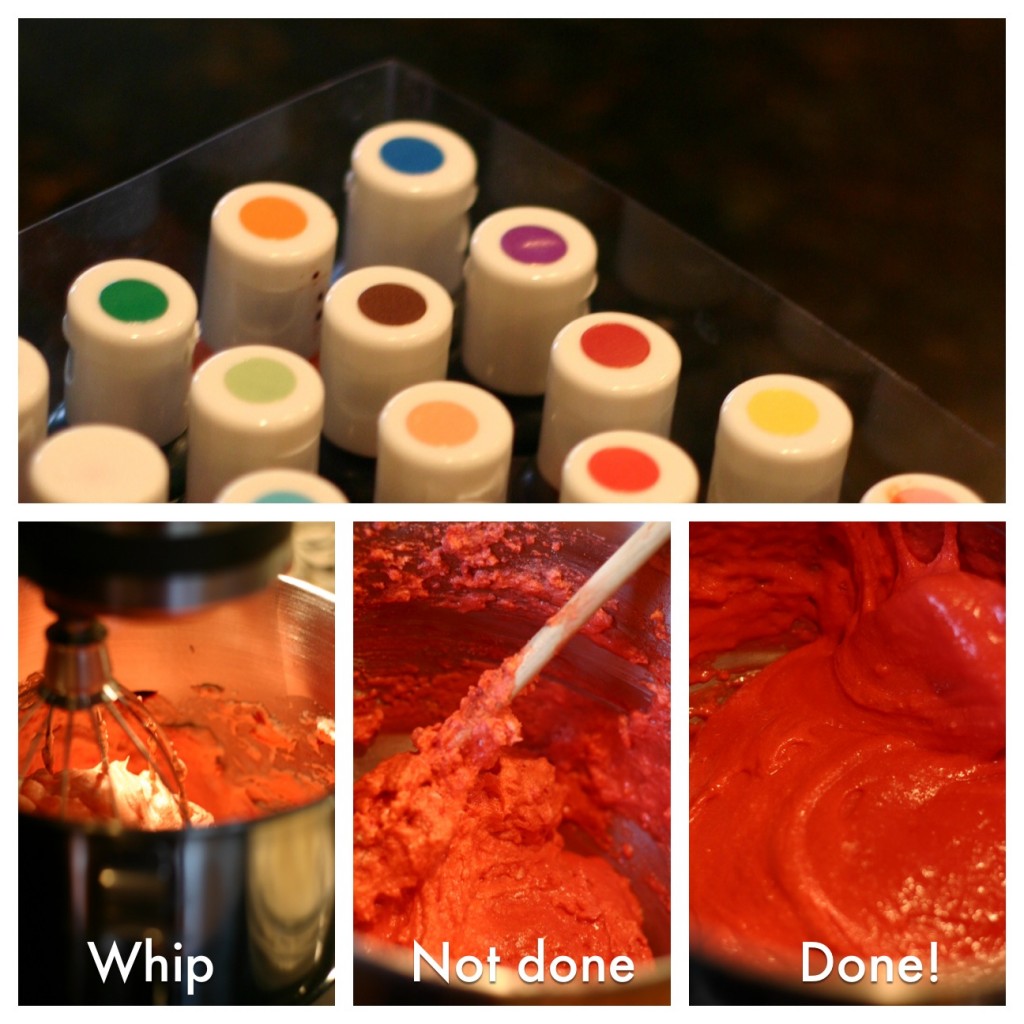 The one thing I was disappointed in with the Red Velvet macarons above was the color.  The red turned out to be a orange red rather than the deeper blue/red commonly associated with red velvet.  Next time I will use a different red food coloring…so no color # here as I didn’t like that aspect of these.

I am addicted to this filling and woke up trying to think of other things to use it on.  It is creamy and delicious and gooey.  A note about the recipe…it will seem as though you will not have enough filling for the macarons.  Don’t fear, you will have more than enough. 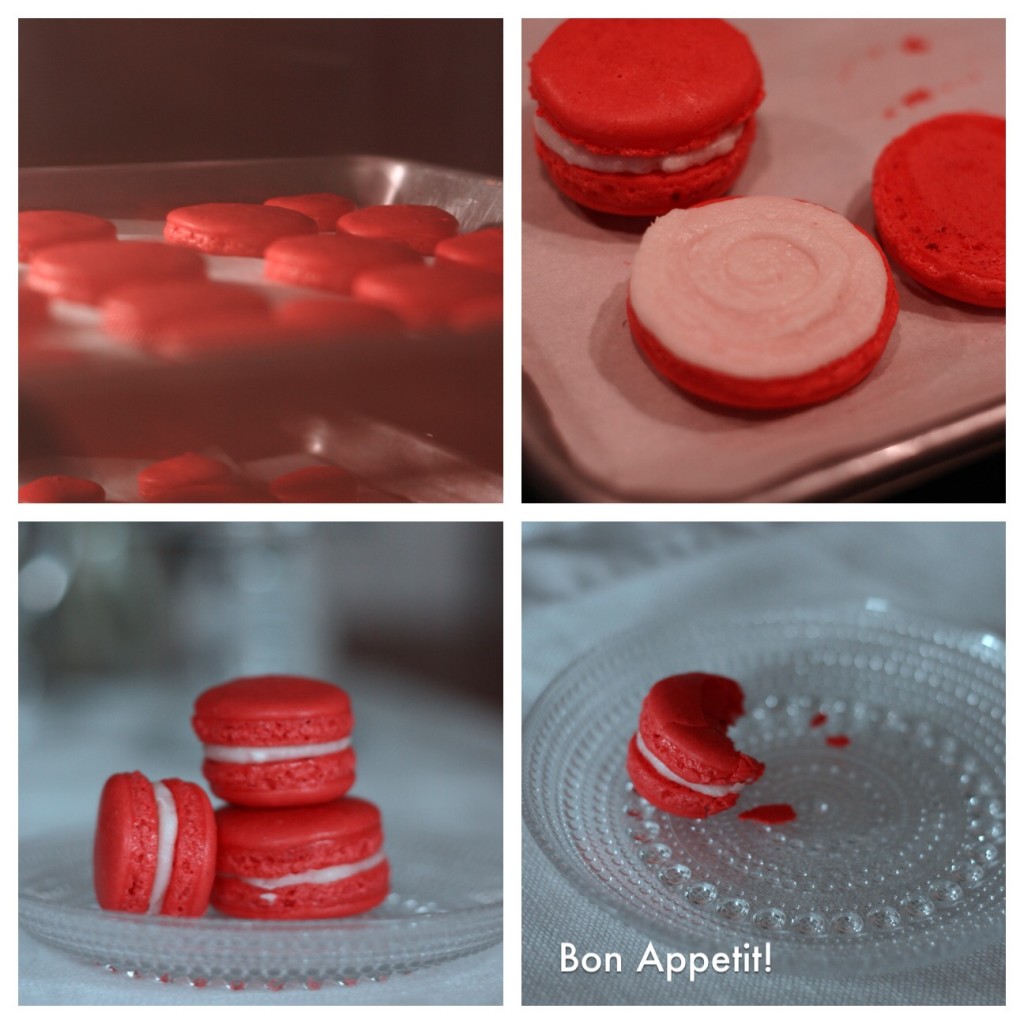 Check out the Macaron Recipe File Page which has the complete list of Macaron recipes and other Macaron resources.  It is a work in progress which I hope to keep adding to! 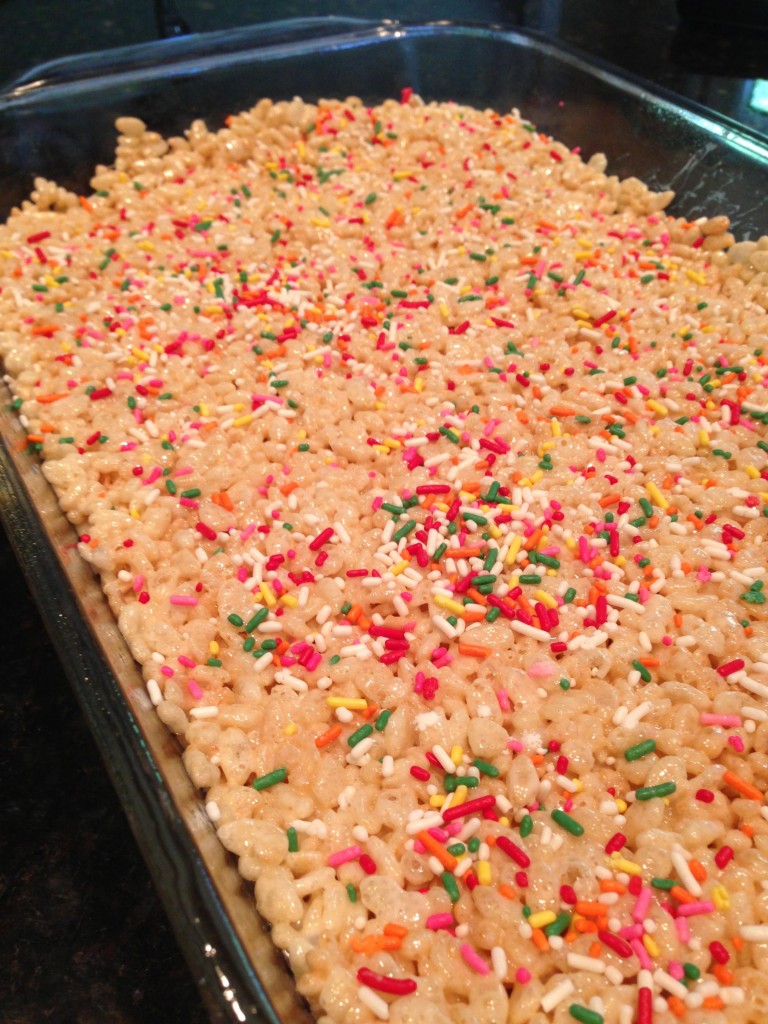 Here is my another little step in adding some Spring into the end of winter.  Jazzed up Rice Krispie treats.  It doesn’t seem that something so very simple can make us so darn happy.  But it certainly does.  That delicious combination of marshmallows, Rice Krispies and butter with the magical dusting of multi colored sprinkles really put smiles on our faces.  If you ask me the sprinkles are what elevated this humble treat to star status. 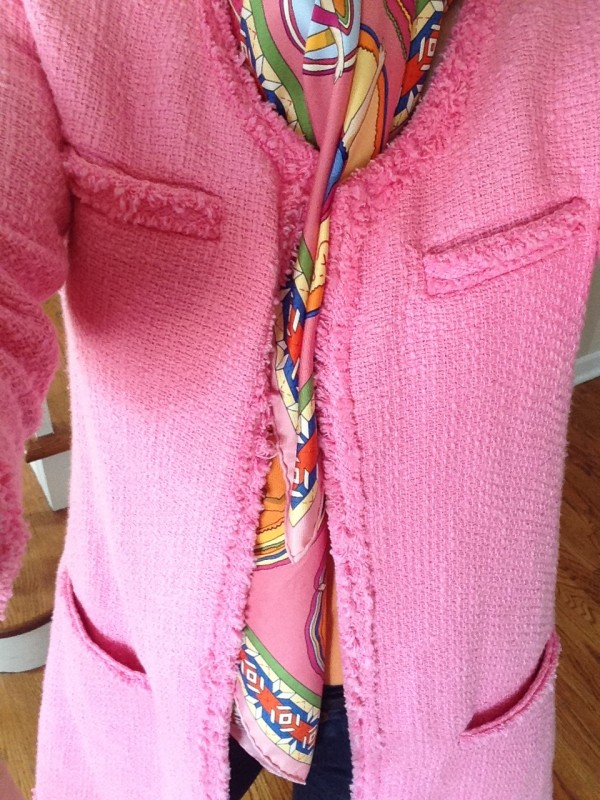 Vowing to keep brightening it up…even as snow is flying outside I wore a bright pink jacket and one of my favorite 90 carres (Belles du Mexique).  (Step 4 in my “Fake It Until You Make It” Spring post). It is a riot of color in a design which features spinning dancers.  I must admit that wearing this super bright pink with a splash of orange did make me feel spring like.  Not so much the boots and down coat I had to don to make it through the blizzard outside.  But at least inside I feel lighter and brighter.

Flowers are in the vase, and sprinkle coated Rice Krispie treats are on the counter and I am wearing a pink spinning rainbow.  It is brightening up in here! 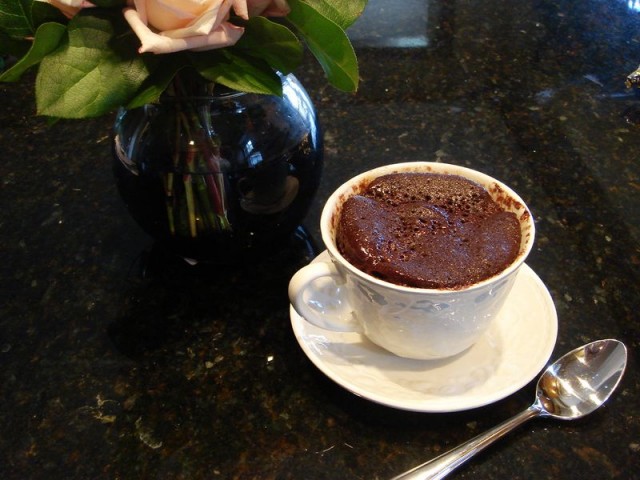 It’s cold and dreary and we are all fed up with freezing weather and piles and piles of snow.  I wanted to come up with a special something to drive these mid-winter blahs.  So as an suprise afternoon snack I made these Chocolate Mug Cakes.  Individual little treats perfect for one.  And what makes them even better is that they are done in 3 minutes…in the microwave.  I use Pernigotti Cocoa for this. I love that deep chocolate flavor!  I used to be available at Williams-Sonoma but I don’t think it is any more.  I found it here (the packaging isn’t that exciting but the cocoa inside is divine!

An amazing way to serve this is to top with a small scoop of ice cream.  Mmmmm.  The winter blues are vanishing before my eyes!

Microwave Chocolate Cake For One 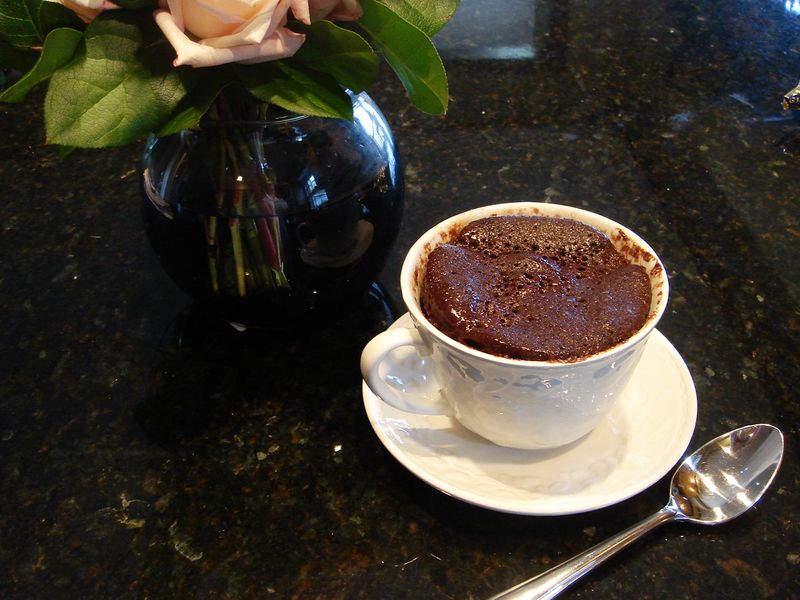