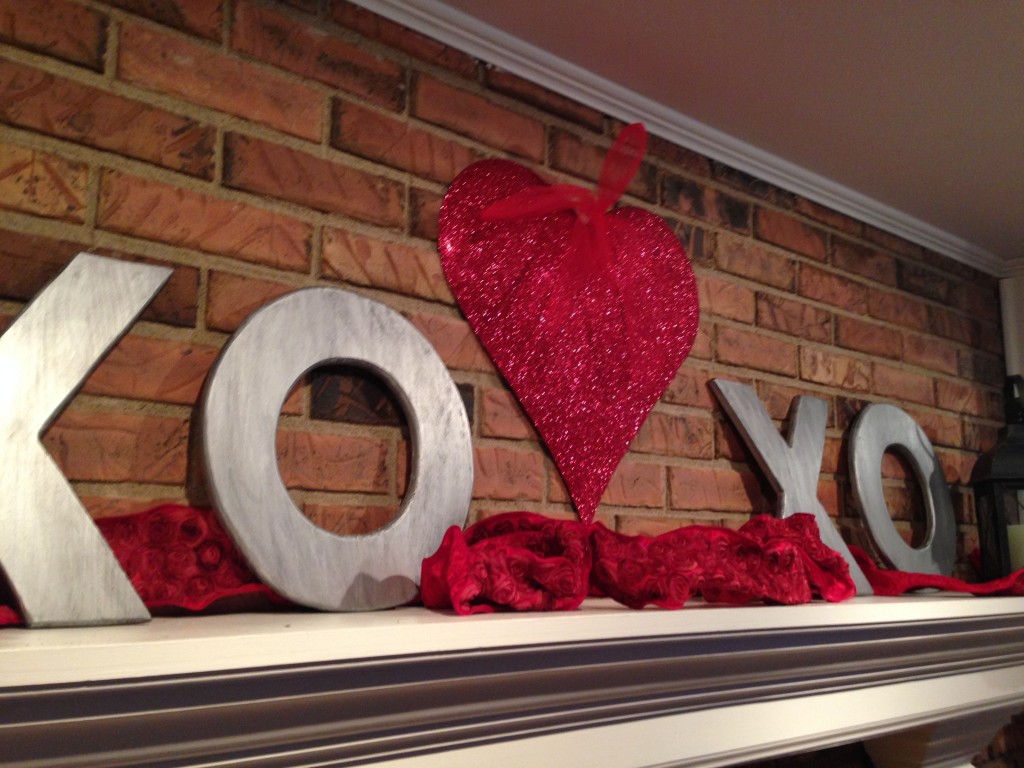 I have always been a big fan of typography.  There is something special about letters…perhaps because I have always loved to read and write.  But also because using letters and words can also bring a sense of whimsy to holiday decorating.  Especially if the letters are oversized. This year I thought I would combine my love of typography, oversize letters and Valentine’s Day for a Valentine Typography project…what resulted was a Valentine’s Day jumbo Faux finished silver XOXO Letters extravaganza!

The first order of business was the letters themselves. I wanted oversized…at least 12″ high, sans serif, in a font which had a modern graphic feel (not too chunky).  I had been working on Olympics Party decorations (more on that in a future post) and so was a bit behind in tracking down what I wanted.  Normally I can find just about anything I can dream of on the internet but because of my Olympic project it was too late to order anything.  Off to the stores I trekked.  I say trekked because it is very much like Siberia here.  Tons of snow and bitter cold.  But I digress…

Four stores into my journey I finally found what I was looking for.  Note to self, large letters = Jo Ann Fabrics.  The selection of letters was quite something, a whole aisle in fact.  There were even HUGE paper mache letters which had to be 3 feet tall.  Another note to self, figure out that to do with those enormous letters!!  Within that aisle of type I found the exact letters I had imagined.  Oversized, san serif, modern looking wooden letters.  I especially liked that there were very flat, it added to the modern appeal. 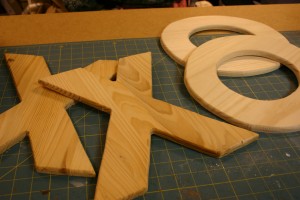 Standing in the “alphabet aisle” it suddently occured to me that I was in such a rush to find the perfect letters themselves that I neglected to finalize what I was going to spell.  I did have a short list but hadn’t pulled the trigger on what exactly it should say.  It came down to: LOVE, KISS, XOXO or I (some sort of large heart) U.  As I looked at the letter shapes it became immediately clear that XOXO was the winner.  There was something about the O’s that made me swoon. Oh shoot, that would have been a great one  SWOON.  I picked up two X’s and two O’s and off I went into the frozen tundra.

I knew I wanted something metallic looking, shiny, but not too shiny.  After a quick sanding and a base coat of white primer the letters were set to be transformed.  It took three coats of metallic Silver Craft Paint

to cover them.  They were shiny.  Too shiny.  I dove back into the paint drawer and mixed up my go-to glaze of black, burnt umber and water.  The consistency should be of dirty water.  Nice image I know but that is what it looks like!  With a foam brush I covered a section of the letter and then wiped most of it away with a paper towel.  Work quickly here because the glaze dries fast.  In no time at all the letters had that patina I was looking for. 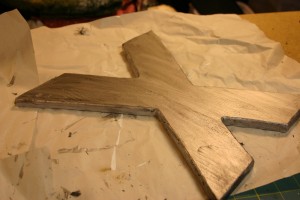 I love the way the letters look…especially with the contract of a huge red glittered heart between them. I could almost swoon.